The Horseless Age
The worlds first automotive magazine, published from 1895 to 1918

Click Here to review our catalog of the oldest books in the world, covering the horseless carraige (automobile)

Not only was The Horseless Age the first automotive magazine, but it was also the most respected automotive magazine and was supported by the upper crust of American society. The earliest issues had only 800 copies per month printed and only a few such copies remaiin. Nevertheless, the vast majority of information that we have today regarding the earliest automobiles, comes from these magazines. Reading issues of this magazine is absolutly fascinating. For example, different issues describes the first manned aircraft flight (May 17, 1899 by A. M. Herring), shows the first advertisment by Henry Ford (a classified ad for a new type of truck), and virtually every early car every built. Also interestingly, the magazine covers a large number of propolsion systems such as compressed air, electric cars, hybrid cars, steam power, deisel power and various types of flywheels and other contraptions. It is interesting to note that there were more electric cars (perhaps pushed by the electric power industry) then gasoline powered cars, till 1911. We offer reprints, on cd-rom, of these rare editions for a nominal fee. Below is a sample of just one issue from late 1895. On the cd, you can click on the thumbnail images and the image is enlarged. The quality of the reproductions is readable to good, and is in black and white. Because of the age and rarity and in some cases, unavailability of certain issues, the quality of the pages may be only acceptable.

Below is an interesting example of what can be uncovered on these early pages:

click on any photo below to enlarge
The May 17, 1899 issue of The Horseless Age describes A. M. Herring's airplane and states that he is the first man to fly.
The magazine was of a high standard and the article should be considered credible.

The June 7, 1899 issue of "The Horseless Age" discussess A.M. Herrings new lightweight gasoline engines.
Notice that the design of the propellers.

The Horseless Age magazine was the first automotive magazine in the United States and was supported by the upper crust of American Society. The magazine was very expensive for the time and provided the latest information and inovations to automobile owners and automobile manufacturers. Today, very few issues of the Horsless Age remain, however almost all of our knowledge on early automobiles comes from this magazine. Copies of this magazine are available in a handfull of libraries in the United States including the Detroit public library, the Library of Congress and perhaps others. Information contained in this magazine must be considered very credible. It is interesting to note that contrary to today's belief, most people at the turn of the century fully beleived that manned aircraft would be produced in a matter of time. The magazine, while specialing in "horseless caraiges" (automobiles), did periodically report about new inovations in aviation and light weight motor technology. 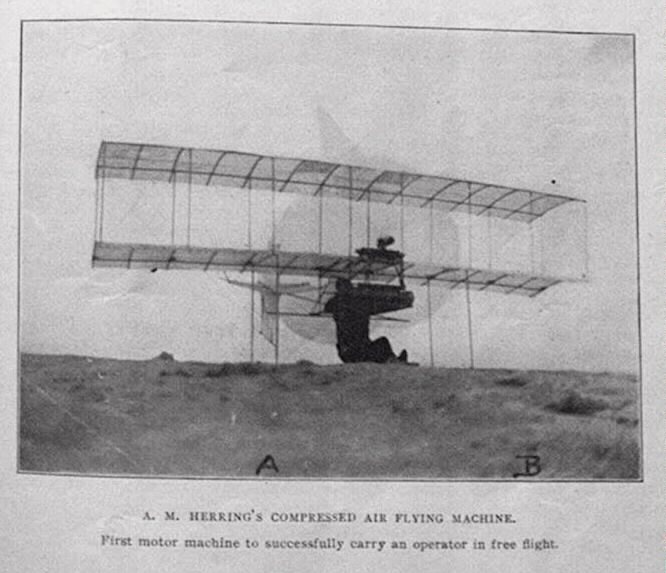 The caption for this photograph, published in the May 17, 1899 issue of The Horseless Age, states:
"A.M. Herrings compressed air flying machine. First motor machine to successfully carry an operator in free flight"

Copyright © 1989-2003 Didik Inc. All Rights Reserved. Designated trademarks and
brands are the property of their respective owners. Use of this Web site constitutes
acceptance of the Didik User Agreement and Privacy Policy.